This document provides set up information on the LDAP/AD integration.

This document provides information on how to set up and use either a Lightweight Directory Access Protocol (LDAP) or an Active Directory (AD) server with the HIAB. The HIAB can be set up to authenticate users against a defined LDAP/AD solution and the main benefit is that user information does not need to be retained in multiple places.

The Lightweight Directory Access Protocol (LDAP) or an Active Directory (AD) integration is used for several purposes, such as:

The elements of the LDAP/AD tab are described below:

Import and specific mapping settings for the user and target integration are located under respective settings sections.

Attribute Mapping Users
Provide the LDAP server attribute names that corresponds to the fields mentioned below.

Attribute Mapping Targets
Provide the LDAP server attribute names that corresponds to the fields mentioned below.

The User Roles section allows you to define if roles should automatically be assigned to imported user, based on already defined group belongings in the LDAP/AD tree. If enabled, you can define a matching field on each user role in the HIAB. If they match, that user role is then automatically assigned to the imported user. The matching field is present in the Maintaining User Role section when you edit or create a new role.
Example:

In the above example, HIAB.Administrator is automatically assigned to users that belong to the group admin in the LDAP/AD tree. Click Save to save the current settings.

Once the LDAP/AD feature has been enabled:

If the text is marked red as above, it implies that the user details either does not contain all required fields or it has content which is not allowed to use. Grey text indicates that the user already exists in the system. A user is valid if the following criteria are fulfilled:

Do not use any comma sign in any of the above inputs as it is interpreted as a comma separation.

If the country is omitted or not available, then it is set to the country of the logged in user. The country is used when selecting the time zone for the user so that the time is reported correctly in the GUI.

The Parent Account setting allows you to import users in different levels if required.

Mapping can be changed in Main Menu > Settings > Integrations > LDAP/AD

Once the user is imported, you can verify the authentication and see the associated groups for that user.
Go to Manage User Accounts, right click on the user and select LDAP/AD Lookup as shown below. 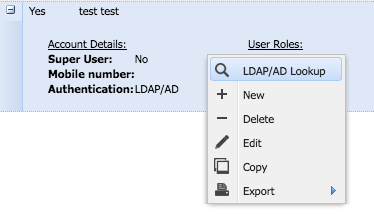 This displays the LDAP/AD Lookup window: 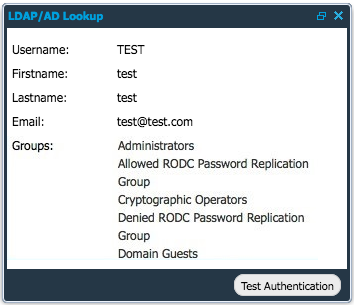 Only 10 groups are visible when doing the test authentication.

Here, you can view the different values for the user along with the defined groups associated with him/her.

Once the LDAP/AD feature has been enabled: 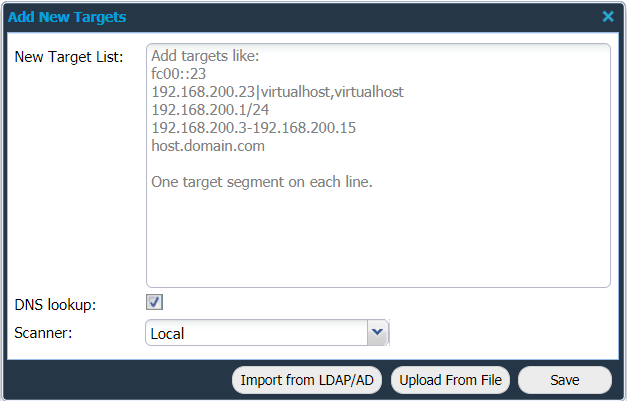 This opens a new window where you can filter which targets to import into the system. If the line is marked red then the target details either does not contain all required fields, or it has content that is not allowed to use. 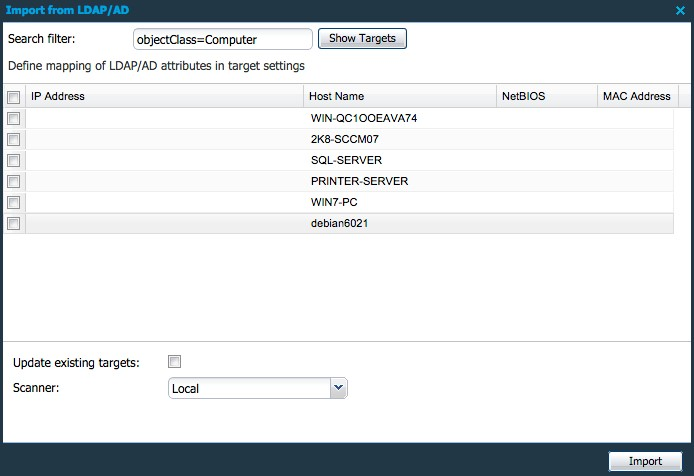 A target is valid if the following criteria is provided:

If Update existing targets checkbox is ticked, the Import updates the available targets.
The Scanner option is only available if you have a distributed environment (multiple HIAB instances connected) and it determines which scanner will execute the scans against those targets associated with it.

Mapping can be changed in Main Menu > Settings > Integrations > LDAP/AD.